We put together a deep dive on History and its latest miniseries, using analysis from Inscape and iSpot, to surface viewership trends and advertising highlights.

First, some topline stats for History via Inscape, the TV data company with insights from a panel of more than 14 million smart TVs: Of all the active smart TVs that Inscape measured in the last 35 days, History reached 23.26%, making it No. 15 for percent network reach.

Of all the minutes watched by active smart TVs in the last 35 days, 1.37% of the time was spent on History, making it No. 20 for network share duration.

When it comes to other networks that History viewers are most likely to watch, Science Channel leads, followed by American Heroes Channel, FYI, Discovery and MotorTrend.

Based on the average percent of TVs watching, the top programs on History so far this year include The Curse of Oak Island, Swamp People, American Pickers, Pawn Stars and Ancient Aliens.

When it comes to other shows watched by History viewers off-network, programs from Discovery-owned networks lead: Expedition Unknown, Outback Opal Hunters, Forbidden History, Unearthed and Curse of the Bermuda Triangle.

Inscape has minute-by-minute viewing data for anything that airs on TV. Below, a look at the Grant premiere on May 25. You can see how tune-in gradually increased over the course of the first hour, peaking a bit after the midway point before starting to decline.

When it comes to other shows that Grant viewers are likely to watch (both on- and off-network), viewers favor other History shows including The Curse of Oak Island, Pawn Stars, Ancient Aliens: Declassified and American Pickers. News programs — including multiple ones from Fox News — also make the top 20 list: Bill Hemmer Reports, The Daily Briefing With Dana Perino, Morning Joe, Outnumbered Overtime With Harris Faulkner and Life, Liberty & Levin. 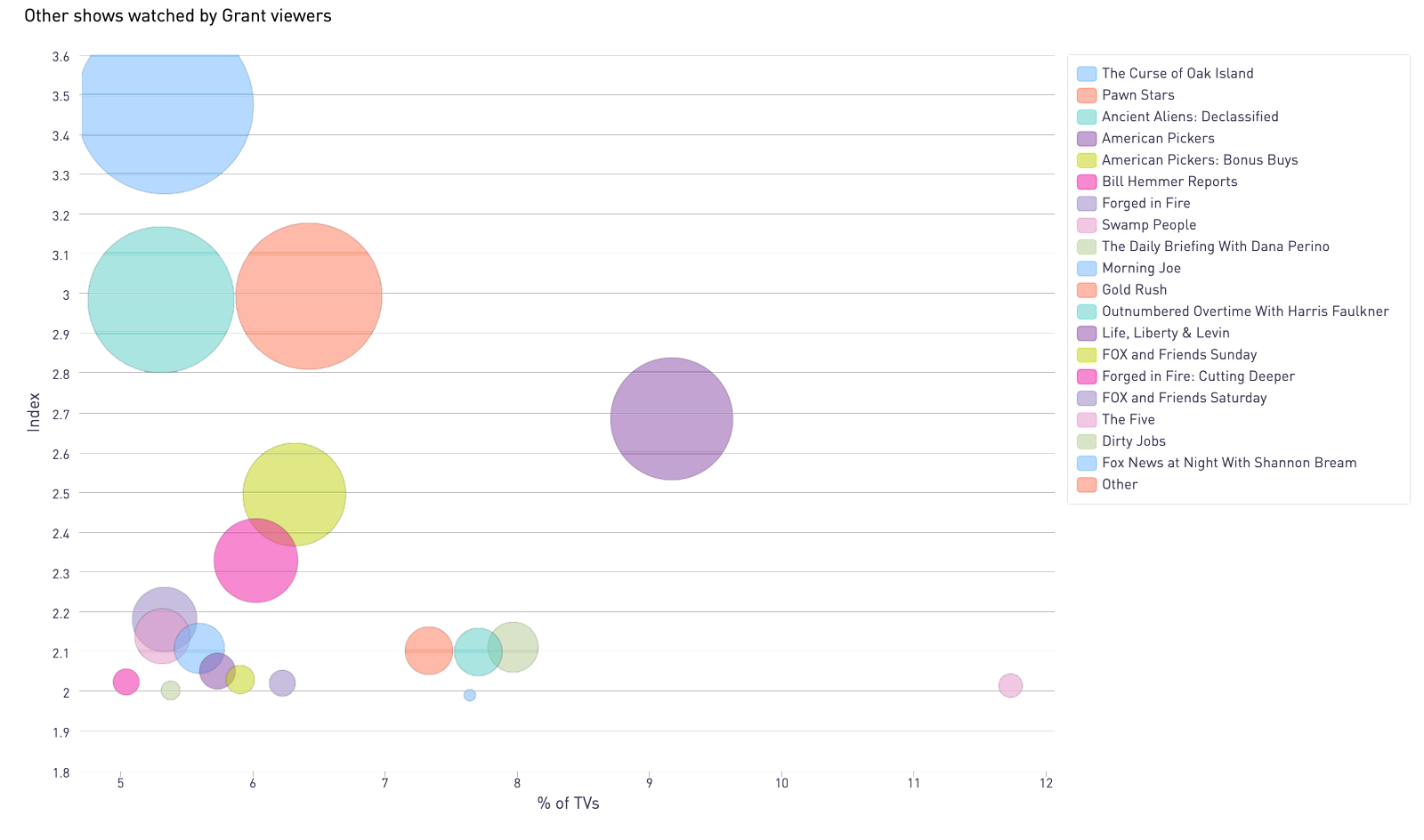 Looking specifically at Grant, there were 330.5 million TV ad impressions served during the three episodes (that number doesn’t include reruns that aired before new episodes). The iSpot Attention Score, which measures the percentage of an ad that is played across a TV device, was 92.91, with ads during Grant 4% less likely to be interrupted than average.