It’s been a wild ride of a year, but it finally feels like a semblance of normalcy is returning — at least to TV screens — as the fall season picks up steam. Among the recently returned series is the NBC juggernaut The Voice, which kicked off its 19th season with blind auditions on Oct. 19 and 20, featuring coaches Kelly Clarkson, Gwen Stefani, John Legend and Blake Shelton.

We dug into some viewership and advertising highlights around the two-night premiere, supplied by VIZIO’s Inscape, the TV data company with insights from a panel of more than 16 million active and opted-in smart TVs, and iSpot.tv, the always-on TV ad measurement and attribution company. Also below: viewership trends for The Voice vs. Fox’s The Masked Singer.

Looking at Inscape’s minute-by-minute viewership data, tune-in rose slightly over the course of  the first hour on Oct. 19, peaking around 9:15pm ET.

Viewership for the second episode was similar, peaking around 9:25pm ET on Oct. 20.

The Voice vs. The Masked Singer

We also took a look at the other shows that fans of The Voice and The Masked Singer are likely to be watching these days. Most notably, Voice viewers are fiercely loyal to NBC: of the top 25 shows watched, only four aren’t from the network. 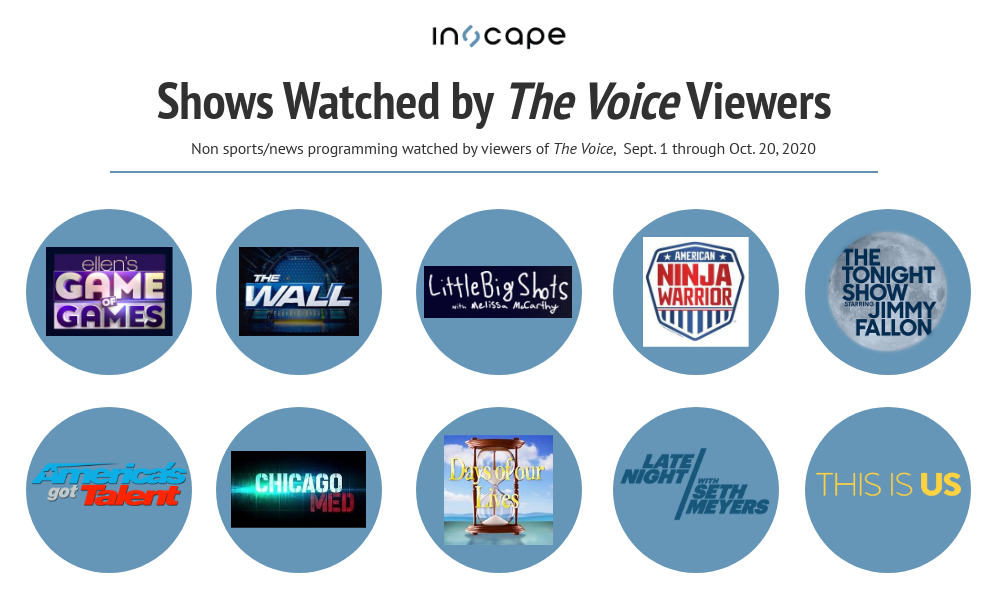 Here are other shows most likely to be watched specifically by The Masked Singer viewers; while Fox is a favored network, these fans are more likely to check out other networks’ shows than The Voice fans.

On the advertising side of things, the first two episodes of season 19 of The Voice generated 709.7 million TV ad impressions, a 4.73% increase from the two-night season 18 premiere in February, according to iSpot.

Target was the most-seen brand across both nights, airing four spots seven times that resulted in 38.2 million impressions. Other top brands included Walmart (31.1 million), Pepsi (29.5 million), TJX Companies (22.6 million) and GMC (21.1 million). The most-seen spot over the course of both evenings was Pepsi’s “Satisfied,” with 29.5 million impressions from its six airings. It’s also worth mentioning that overall, ads during The Voice premiere performed 16% above the norm when it came to viewer attention.

Here’s a list of brands that have advertised during both The Voice and The Masked Singer so far this fall: