Want to get an audience coming back for your show? Find ways to get them responding emotionally to specific performers and you’ll have that audience hooked, and wanting more week after week, a new study shows.

“Talent not only drives emotions, but also live viewer tune-in week over week,” said Schweidel. “Further, there is a sustained effect of talent-driven ERs increasing live and time-shifted viewership over multiple weeks.”

The study looked at emotional reactions by fans to 621 episodes across 55 primetime, scripted TV shows running on the five U.S. broadcast networks. The shows, spanning several genres, aired in the first quarter of 2017.

It found that those emotional reactions can predict live viewership, still the most valuable audiences in the evolving universe of TV. Live tune-in has become much less common as audiences use VOD,  streaming services, time-shifting and other tactics to watch programs when it suits them, as opposed to when they first air.

“This study proves emotions not only drive increased live viewership week over week, but also improve the number of time-shifted viewers in the first three days after a show airing,” said Canvs CEO Jared Feldman, CEO at Canvs. “With OTT and subscription services on the rise, there’s a strong indication audience’s Emotional Reactions will align with subscription retention as well.” 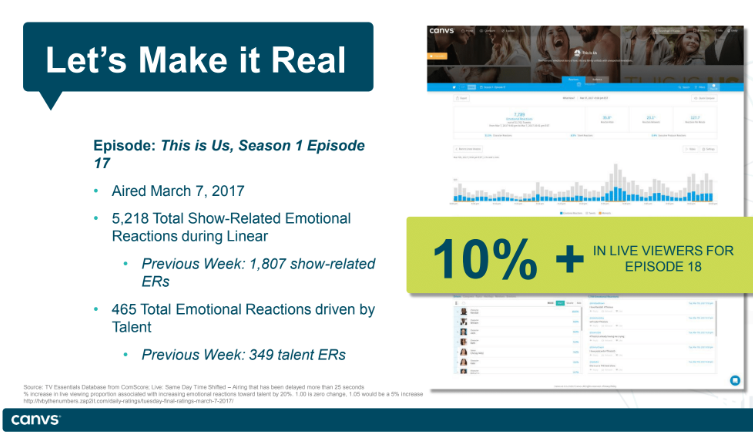 The tear-jerking NBC family drama “This is Us,” for instance, saw a 10-percent jump in live tune-in to the next episode after an emotionally resonant week.

Other findings of the study included: